Jurgen Klopp hopes a nervy 1-0 win over West Ham will be more fondly remembered at the end of the season after Sadio Mane’s goal closed the gap on Manchester City at the top of the table to three points.

Defeat leaves West Ham still two points outside the top four having played more games than all their rivals for a place in next season’s Champions League.

But David Moyes’ men will rue a host of missed chances to salvage a point, which would have given City breathing space at the top of the table.

Pep Guardiola’s men can restore their six-point advantage when they host Manchester United in a derby at the Etihad on Sunday.

“You cannot only win the ones where you are flying, today we were obviously not flying and had to dig really deep,” said Klopp.

“I don’t know if we will remember this game as one of the important ones. You have to get over the line and I was pleased with that.

“If you are not well organised you have to defend with passion and that’s what we did.

After lifting the League Cup last weekend, Liverpool remain on course for a historic quadruple of trophies.

The pursuit of City may be the biggest challenge in that quest, but a run of seven straight league wins has at least enlivened a fight for the title after City looked set to cruise towards a fourth league win in five seasons at the turn of the year.

Liverpool roared out of the blocks and should have been in front within seconds when Mohamed Salah fired wastefully straight at Lukasz Fabianski with just the ‘keeper to beat.

West Ham were without the influential presence of Declan Rice in midfield due to illness, while Jarrod Bowen limped off early in the second half with a nasty looking injury.

Should Bowen be sidelined for a lengthy spell, Michail Antonio will be even more crucial to any remaining dreams of a place in the Champions League next season.

Antonio has only scored once in the Premier League in 2022 but showed signs of regaining his best form as he twice forced Alisson Becker to turn the ball behind for a corner.

Liverpool went in front on 27 minutes when Mane was in the right place to tap in Trent Alexander-Arnold’s cross.

The Hammers are one of only two teams to beat Liverpool since April having edged a 3-2 thriller at the London Stadium in November.

And they should have come away with at least a point as they enjoyed the better chances after the break.

“I felt we were worthy of something today,” said Moyes. “There are signs we are getting closer to challenging the best teams.

A last ditch challenge from Andy Robertson forced Bowen into slashing wide as Liverpool’s high line was repeatedly caught out on the counter-attack.

Manuel Lanzini had the biggest chance to provide another twist in the title race when the Argentine somehow side-footed over with the goal gaping 20 minutes from time.

Klopp took the brave decision to take off Salah with the game still in the balance 10 minutes from time, much to the Egyptian’s displeasure.

Antonio had another late chance to claim a point as he burst clear on goal only to be foiled by a combined effort of Robertson and Naby Keita as Liverpool held on. 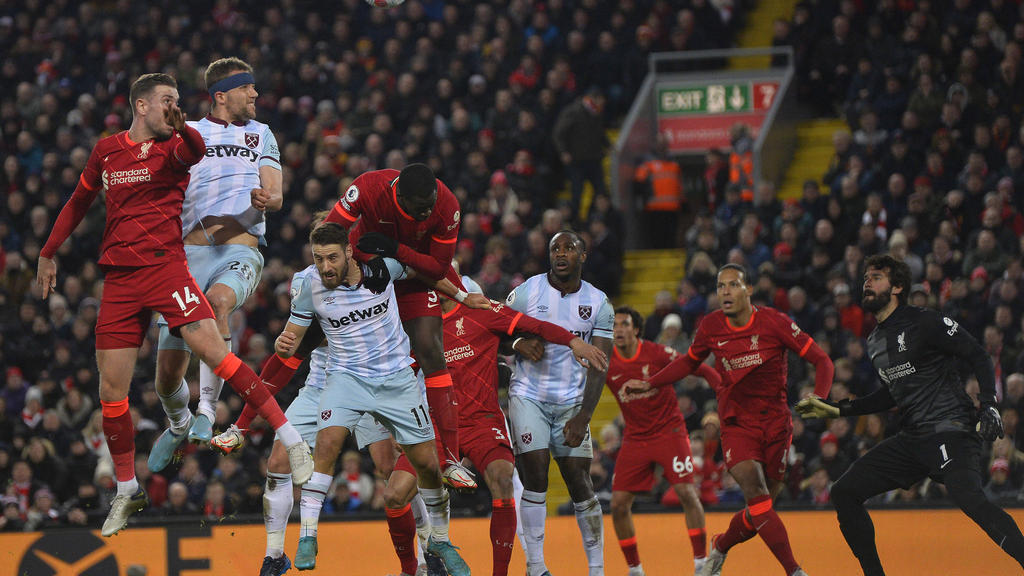